Four Years Too Many Without the King

Atlantic City — December 5, 1998 — On this date back in 1998, Don King Productions, along with Bally’s Park Place brought Atlantic City boxing fans an exciting twelve bout fight card that was appropriately called “The King is back.”

It was Don King’s return to town after a four-year hiatus and the very first boxing event at the brand new Atlantic City Convention Center.

A Chance to Walk Away as Champion

The card was headlined by three world title bouts and featured Albuquerque, New Mexico’s own, Johnny “Mi Vida Loca” Tapia who stepped up in weight to challenge the reigning WBA World Bantamweight champion in Nana Konadu of Ghana. 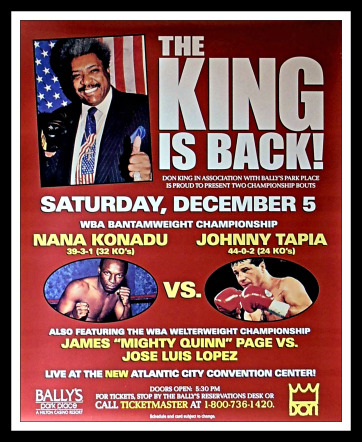 Tapia, a two-time world champ at the time, came to the ring as the current IBF World Jr. Bantamweight champion for this challenge, and after twelve rounds of boxing, walked away as a three-time world champion, winning a majority decision victory.

Even with Lopez scoring a pair of knockdowns in rounds 3 & 9, Page fought long and hard enough to successfully defend his title with a unanimous decision win.

It was the first and ultimately the last boxing card at the new convention center because of obstructed views, but regardless of that, on this evening, Atlantic City was shown that the King was indeed back.