Fighting off a Repeat

It was a rematch of their first meeting that took place in New York’s Madison Square Garden on July 11, 1996.

The first fight made sports headlines after a huge brawl broke out in the ring, which resulted in fights in several parts of the arena.

Tempers swelled after Golota was disqualified for landing multiple low blows throughout the contest.

Golota was penalized points in the fourth, sixth and seventh rounds which dropped Bowe to the ground in pain, but it was yet another low blow in the seventh that sent Bowe to the canvas in pain for the final time.

The referee, Wayne Kelly, had given leeway, but had seen enough, and decided to call an end to the bout in the seventh.

All Eyes on the Rematch

The resulting brawl was indeed that proverbial black eye on the sport, but it also made the rematch that much more of a curious attraction. 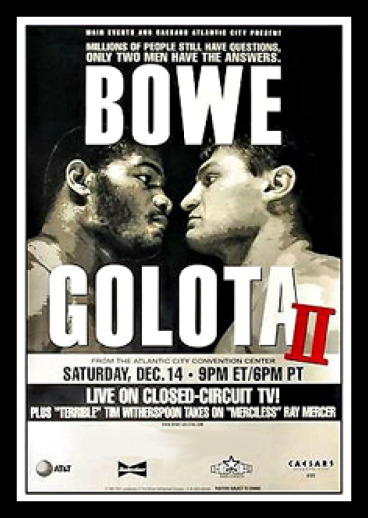 With Atlantic City set as a new venue, new expectations for the rematch were set.

Golota, who tipped the scale at 243lbs for the first fight, weighed in at 239lbs for the rematch.

In their second outing, Golota was definitely making an account of himself, even dropping Bowe in the second round. But in that very same round, Golota chose to resort to unsportsmanlike behavior yet again.

As a result of his own intentional head butt in the second round, Golota opened up a cut over his own left eye, which resulted in the referee, Eddie Cotton, deducting a point from Golota himself for the foul.

The third round went to Bowe and a fourth round rally dropped Golota in the round’s opening stanza. Unfortunately for Golota, later in the fourth, yet another point was taken as a result of a low blow that dropped Bowe and caused a delay in that round.

In between rounds four and five, Golota’s corner implored him to not throw any more body shots, explaining that Bowe was a faded fighter.

While both looked tired at the start of the fifth, Golota again was able to drop an even more exhausted Bowe and battered the former heavyweight champion throughout the round.

Even with a cut eye and mouth, Golota thoroughly dominated round six, seven and eight, landing vicious shots to Bowe’s head.

In the ninth round, Golota seemingly threw away the fight when he landed yet another very low blow in a round he was again winning.

After this final below the belt shot, the referee had seen enough and immediately called a halt to the bout at the 2:58 mark of round nine.

The disqualification win again preserved Bowe’s record, but set off red flags when the post fight interview found him slurring in a manner that was blamed on the amount of blows Bowe had taken in his career.

In another bout on the card, Ray Mercer won a unanimous ten round decision against Tim Witherspoon.

With nine bouts in all, the card definitely went down as one for the record books.