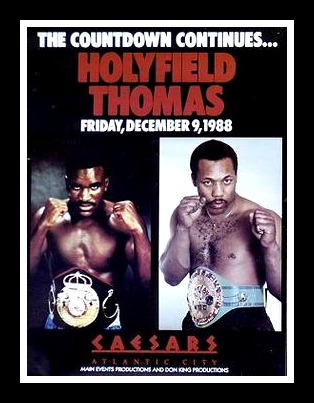 New to His Class

Including his very last bout, against James Tillis five months earlier, this was only Holyfield’s second time as a heavyweight in his career.

The bout ended when Thomas’ corner, watching their fighter take punishment for seven round, refused to allow him to come out for the eighth.

A Legendary Heavyweight to Come

After the win, Holyfield vacated the Cruiserweight title to compete as a full-time heavyweight.

The wins by both Holyfield and Dokes would set up a meeting between the two in their very next bout.