Thunder on the Boardwalk 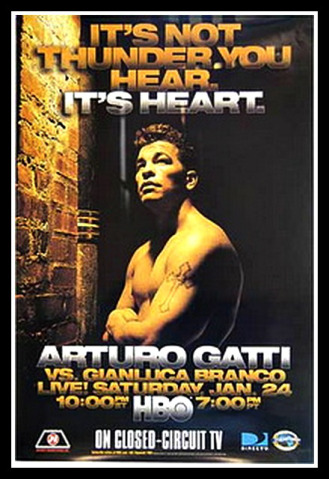 Gatti, who had made The Hall his second home, looked to capture his second world title when he faced the tough undefeated Italian, Gianluca Branco, for the vacant WBC World Super lightweight championship.

Gatti used movement and a good jab to outbox his opponent over the first nine rounds, with Branco continuing to come forward and landing some of his own decent shots at times. However, a nice Gatti left hook dropped Branco with 37 seconds left in the tenth round to make a knockout necessary for Branco to pull off an upset.

Branco survived the round and the fight, but the knockout never came. Gatti earned a unanimous twelve round decision and was declared the new WBC Champion.

Also on the card was rising star, Francisco Bojado who faced Emmanuel Clottey in a super lightweight showdown.

Bojado walked away with a ten round unanimous decision, but the highlight was after the fight when Bojado was walking back to his dressing room.

Paulie Malignaggi gave us a glimpse of his gift of gab by goading Bojado into a heated argument and staredown which had to be broken up by Bojado’s trainer, Floyd Mayweather Sr. and surrounding security. Unfortunately, this match-up never materialized.

Also, gaining victories on this night was Kermit Cintron, who scored a fifth round TKO stoppage of  Humberto Aranda, and  James McGirt Jr., Son of former two division world champion,  James “Buddy” McGirt. It was the younger McGirt’s professional debut.

In the audience enjoying the night of fights were former greats, “Gentleman” Gerry Cooney and Ray “Boom Boom” Mancini.