Atlantic City – It has been thirteen years since the tragic passing of Atlantic City’s own, Leavander Johnson. It was a loss felt throughout the boxing world, as well as the community where Johnson grew up and called home.

While his impact in death had been a blow, his life and career has given the proverbial punch needed to keep his legacy alive.

Celebrating One of the Greatest’s Birthday 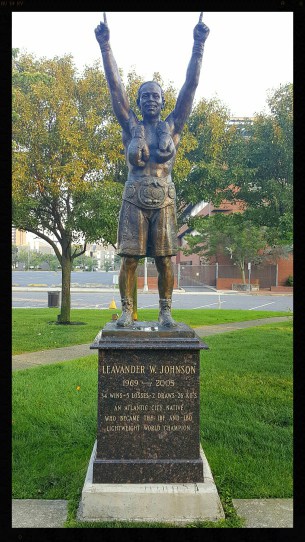 A boxing who’s who gathered on May 26th, 27th and 28th – Memorial Day weekend 2017, at the Claridge Hotel in Atlantic City for even further acknowledgement of Johnson’s impact when he along with his father/trainer, Mr. Bill Johnson, were both inducted into the ACBHOF’s inaugural class.

Their names, along with those of former heavyweight champion Mike Tyson, Arturo Gatti, Larry Holmes, Michael Spinks, Dwight Muhammad Qawi, Larry Hazzard and so many more were permanently enshrined as acknowledgement of the impact they all have unquestionably made to the sport of boxing.

Look for our talk with the well respected Mr. Bill Johnson, (link), on the ACBHOF blog. He talks in depth about different subjects that will definitely peak interests.

Here are some links from doghouseboxing.com of one of Leavander’s very last interviews and subsequent pieces after his untimely passing.