Bill Johnson Lays the Foundation for Boxing in Atlantic City

Atlantic City – On Memorial Day weekend 2017, the Atlantic City Boxing Hall of Fame will have its first induction ceremony honoring many who have played their part in putting Atlantic City prominently on the boxing map.

Of all the names that will be announced throughout the weekend’s festivities,  the name Mr. Bill Johnson just may ultimately get the most applause.

Johnson, a longtime Atlantic City native and boxing fixture, will be inducted into the AC Boxing Hall of Fame for his close to forty year involvement with the sport and the Atlantic City boxing scene.

Already a New Jersey Boxing Hall of Fame member, his induction to the AC Hall of Fame is one that literally hits home. Being a long-time resident, the honor fills him with pride, but it’s also one he admits came by surprise.

When asked about his thoughts upon hearing about his induction, Johnson explains, “I was speechless at first, because I never even dreamed about something like this. It was the furthest thing from my mind.” He admits, “I just came into the boxing business through the PAL to help my sons and other boxers, and it never dawned on me to be inducted into any Hall of fame. That is why I am again overwhelmed and thankful”

He may feel overwhelmed, but the honor is indeed deserved. He has not only worked with the PAL fighters, but with Atlantic City being one of the major places for fights, his working with the top professionals in some way was inevitable.

He explains, “All the boxers who participated in the matches at the casinos, especially during the heyday, come and look for a venue where they can train to get into shape. Manny Steward use to bring his fighters in, as well as Don King and his fighters. We’d work with numerous headliners like Bruce Seldon, Pinklon Thomas, Carl “The Truth” Williams, Julio Caesar Chavez, Dwight Qawi, Mathew Saad Muhammad and others who would come through.” He recalled fondly, “I even remember Angelo Dundee once gave us a time clock when he was training a fighter here at the PAL.”

Having opportunities to work full-time elsewhere, like in Ohio with fighters from the Don King stable and with Emmanuel Steward proteges to name just a couple, Johnson decided to remain in Atlantic City to continue working with fighters like his son Leavander.

While it was initially his three sons who brought him into training, two of them decided to stop fighting. His third son, Leavander, had too much talent and warrior spirit to take the same path as his brothers. His goal was to become a world champion and the elder Johnson was there to lend help to his son.

Together with his father, Leavander finally realized his dream of becoming a world champion when in June of 2004, he defeated Stephano Zoff by 7th round TKO for the vacant IBF World Lightweight championship in Italy. It was a goal achieved through setbacks and adversity, but it was one that Leavander was determined to make happen.

Unfortunately, Leavander tragically passed away in a Las Vegas hospital from injuries he received five days earlier in his first title defense against Mexico’s Jesus Chavez. It was a blow to not only the Johnson family, but also to Atlantic City and the boxing world as a whole.

Johnson states, “I’ve always said that Leavander elected to bang when he didn’t have to, and that came from his big heart. He was knocked down like five times when he fought the Russian, [Orzubek] Nazarov in Florida, and even though the fight was stopped in the 7th round, reporters asked him [Nazarov] why after having him in trouble so many times was he not able to get him out of there? ‘His will was just  too strong’ is what Nazarov said.”

When asked about his correspondence with Jesus Chavez after the tragedy, Johnson said, “He use to call and often speak to my older son. When he came to the hospital after the fight, he spoke to the family and I didn’t want him to carry a burden, so I told him that this is the nature of the game and it could have easily been vise-versa. These young men go into this sport knowing that these things can happen.”

He goes on to quote Leavander himself, who was questioned in an earlier broadcast of the Foreman Boxing Show about the sport implementing more safety. He stated, “Leavander smiled and said, ‘Safety? Listen, this is a dangerous sport because you really aren’t supposed to be hit upside your head.’  Which is correct.” 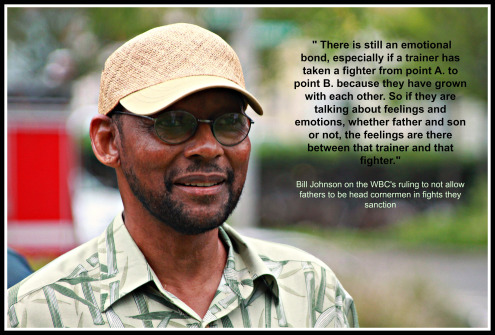 The reality is boxing is the hurt business, but Johnson felt confused about the recent WBC decision to not allow fathers to be head cornermen in title fights that are sanctioned by them.

“I really don’t understand why they would implement something like that. Who knows a fighter better than his father does? There is still an emotional bond, especially if a trainer has taken a fighter from point A. to point B. because they have grown with each other. So if they are talking about feelings and emotions, whether father and son or not, the feelings are there between that trainer and that fighter.”

Legends Run in the Family

His job has been hard, but beneficial in seeing his fighters rise to achieve their goals. He was there throughout his son’s career and life, and his name will be going into the Atlantic City Boxing Hall of Fame along with him as well, as Leavander (34-5-2, 26KOs) is also one of the 24 names of inductees who will be honored.

“I know Leavander was a humble person who loved boxing and Atlantic City. Which is why if he was here, I know he would be extremely proud and just explode. Actually, I am really more proud for him because he set his goals and accomplished them, and the acknowledgment shows that his efforts were appreciated.”

When asked how much longer will he keep at it, he humorously noted a recent incident by saying, “One of my trainers saw a guy walk in the gym and said, ‘That guy looks good and in about eight years we can,’ and I had to say hey hey…I now take it one day at a time. I once walked in and one day I will walk out for the last time. In March I will be 76 years old, but have been going at it since I was thirty-something years old.”

He reminisced about a time when Leavander was asked what he will do after boxing, and Leavander’s response is still firmly in his head. He said, “Leavander responded by saying he will come back to the gym and work with his father training fighters. I did stay away from the gym for about two months after he passed, but I know that’s not what he wanted.”

It’s not what he wanted and the PAL and the sport of boxing are glad that he has kept doing what he does best, training hungry fighters and making a difference.